We went to USA together as 4 friends in 2012. One of our friends had to go back to Turkey earlier than us in August, so we were left only 3 people for our vacation time. Since I have already traveled on the east coast in my work and travel adventure in 2010, I was thinking to travel nowhere but the west coast. Besides, we were working in New Jersey all summer and we had the chance to visit close states like New York and Philadelphia a few times already. There was no need for an east coast tour.

In 2010, we bought a 5 day tour to travel east coast. It was really mesmerizing. We have seen many old structures, museums and important landmarks but there was a little problem catching up with the tour. We couldn’t spend enough time in many locations. We were like running around all the time. So, I have decided to rent a car, book the hotels we want and travel freely.

You can see our program above. We bought our round trip flight tickets (Philadelphia – Las Vegas) from Expedia. Hotels were booked through Expedia and Booking. For the car rental, we listened to our experienced friends in Wildwood and rented the car from Fox Rent a Car. We went to Philadelphia from Wildwood by bus and headed to the airport. Our 4-5 hours US Airways flight departured at 20:35 and landed to Las Vegas at around 22:48. Again used the shuttles to get to our hotel. Our hotel was the Stratosphere Hotel and it was located in the beginning of the famous Las Vegas Strip with LA’s tallest 350 meters tower. As all Las Vegas strip hotels has, our hotel had casino aswell. As soon as you step into the hotel, you are between the slot machines, roulette and blackjack tables. Since we arrived to our hotel after midnight, we stayed around the hotel and checked the casino inside the hotel a bit.

Our first LV day plan was to walk along the Las Vegas Strip and check all the casinos one by one. We started from the left side and turned back from the right side. We woke up a little later than we expected and started our trip at around 10 am. In USA, everything is HUGE. It was really taking some time to check out the casinos, play games and walk between the casinos. We were able to reach to Mandalay Bay which is at the end of the strip just before sunset. When you enter the casinos, your sense of time disappears. Some casinos are connected to each other from the inside and you are stuck inside for hours without seeing any daylight. Casinos are full of light and some of them are designed to look like regular sky so that you don’t know how long you have been inside.

On the way back, we continued our trip in the legendary casinos of Las Vegas and watched famous water shows and theaters from Bellagio and Mirage. Being the cheap students, we fed ourselves from mc donalds and subway during the day. When we turned back to hotel it was already after midnight and we went to top of the tower to see the awesome Las Vegas night view. Our little journey started at 10 am and ended at 2-3 am the next day after walking at least 14-15 hours. We also ended up exhausted.

As we have seen all the casinos on our first day, we were relaxed to know that we can spend time to other things. We were swimming at the pool, watching people freefall from the 350 meter tower. In the afternoon, we also went to top of the tower and tried the atractions there. It was a really exciting experience to do those atractions at that height.

In our last night in Las Vegas, we went to the car rental office near the airport to get our already reserved car. At first, they didn’t want to approve my driving license and denied to give our car. Then a supervisor involved to our problem and checked the license himself. In the end we were right. They also had to upgrade our car to an SUV instead of a sedan because they didn’t have any sedan class car. After taking the car, we went to walmart to buy a GPS device and a few more things to eat during our journey. 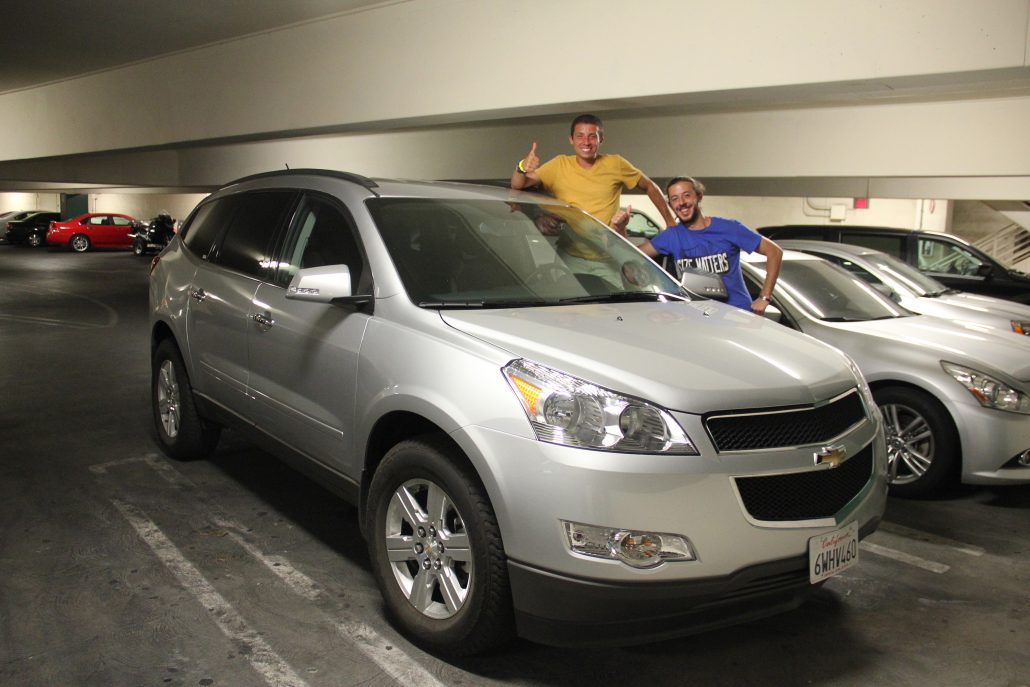 Since we came back to hotel really late, we just slept and rested for the journey. 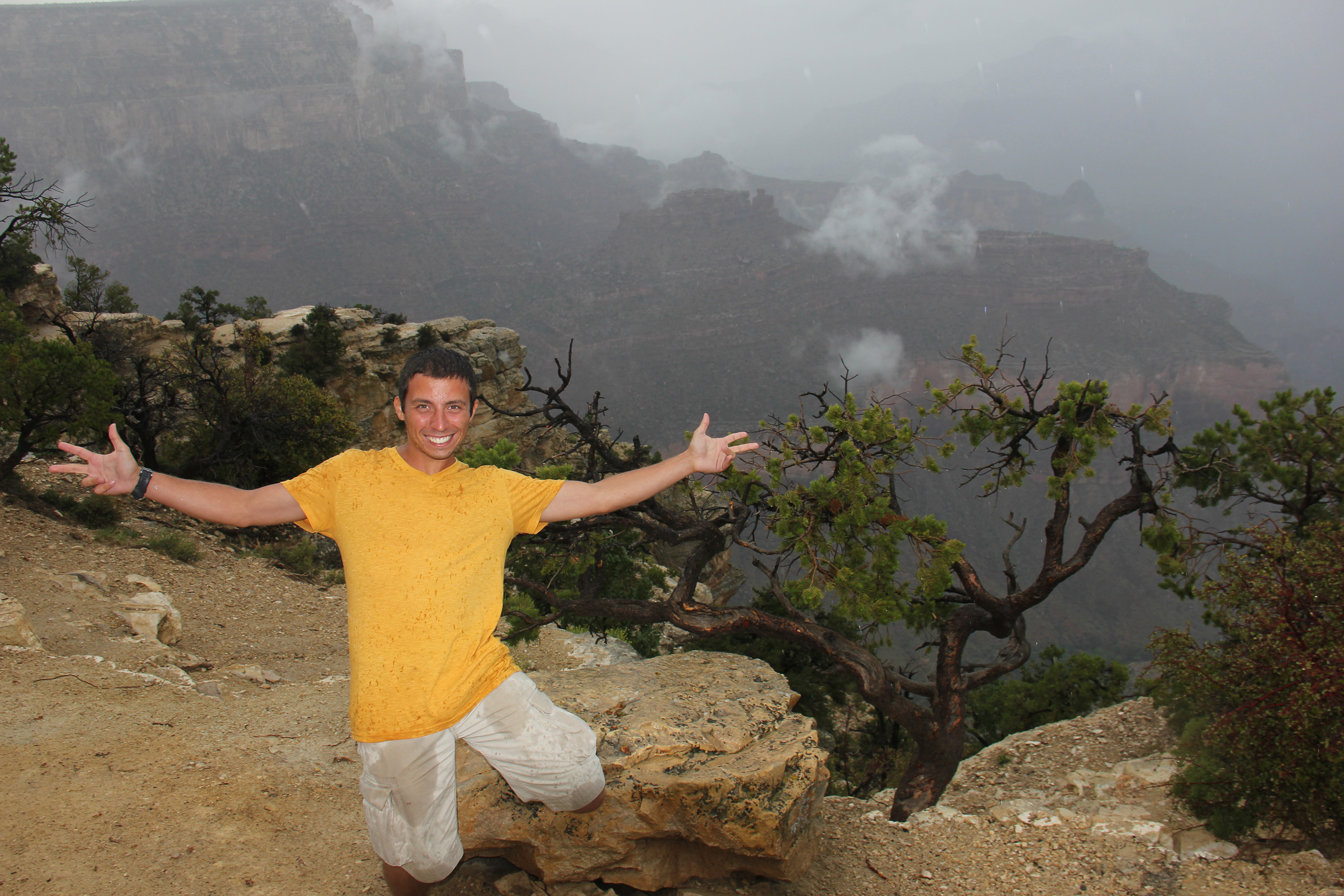 Again we couldn’t get up as early as we wanted and checked out from the hotel at around 9 am. After a 5 hour trip, we made it to Grand Canyon. We were hoping to see the awesome view but the weather betrayed us. There was a huge storm and all the canyon was lost in the fog.

First, we headed to the museum hoping that the rain would stop. When we were done at the museum, weather hasn’t changed much. So, we ran to our car and tried different view points. We stopped and took photos, watched the view where there was less fog and rain. You can see in the photo where there was less fog (!). You can also see how the weather was like in this video even though you may not understand anything 😀

After all, we couldn’t get the experience that we wanted. I just want to go there again, camp under the stars for a few days.

When we reached to the Grand Canyon, it was already around 2 pm. We continued to check view points until sunset and headed back to Los Angeles. We had a 9 hour trip waiting for us.

First day of our journey ended when we checked in at 4 am in Los Angeles after the long trip from Las Vegas and Grand Canyon. It was really exhausting to drive 15-16 hours in a day for someone like me who had no long driving experience but still, I was the first one to get up next morning. After waking up the sleeping beauties and having breakfast, we went to Universal Studios with the tickets we bought earlier. Universal Studios is the producer of many well-known movies and there are many atractions and shows with their movie themes. We saw how pets are trained for the movies, how the effects are done and many things like that. Also tried their roller coasters. I personally loved the 4D Transformers ride. There are many fake 6D or 7D movies in Turkey but non of them felt like this 4D ride. You can also watch one of the shows I recorded below:

On our second day, we went to see the city center, tried to see the Staples Center but it was closed. We also went to Venice Beach and watched the sunset there. Also had tacos from Taco Bell for dinner 🙂 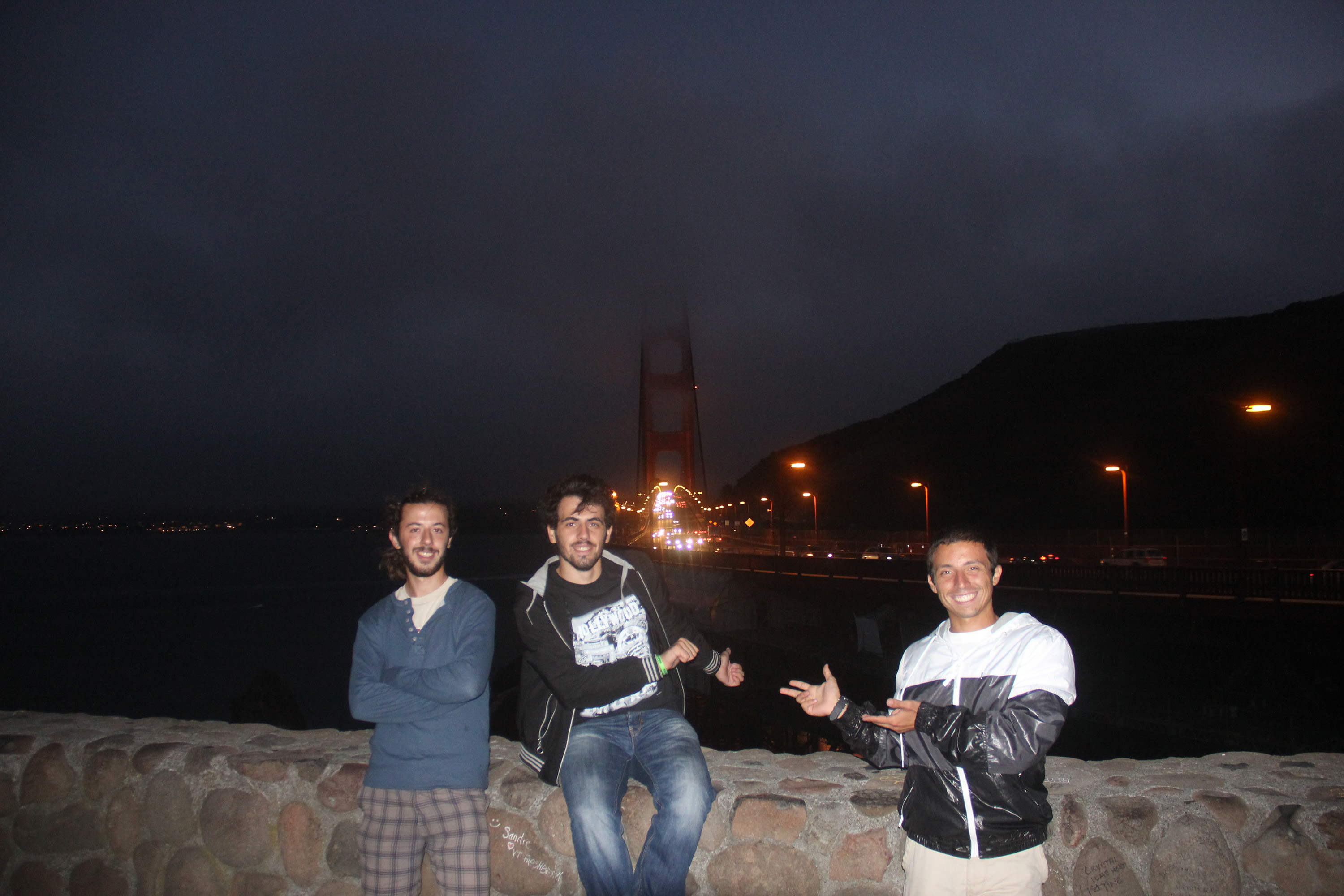 After two days full of fun in Los Angeles, we hit the road to San Francisco early in the morning. The weather was really nice when we arrived there around noon time. We went to see many landmarks and beautiful views. Before the sunset the weather went all cloudy and cold. While we were going to a park which Ismail wanted to see so much, I took a wrong turn and we ended up on Golden Gate Bridge. We had to cross to the other side of the bridge. We couldn’t even see the top of the bridge towers. There’s a view point where everybody goes and takes picture but we couldn’t go there and found another viewpoint as you can see in the picture. Even if we found that better view point, we wouldn’t see anything because of the fog and clouds. After checking out that side we turned back to main San Francisco area.

Our plan for the next day was to get up and go to Yosemite Valley directly. As we couldn’t see the park Ismail wanted to see, we went there in the morning. Before completing 24 hours in San Francisco, we continued our trip to Yosemite.

After the short San Francisco adventure, we spent half day at the Yosemite Valley watching the great view. It has one of the largest granite quarry in the world. Especially Sercan who is studying mining engineering was happy like a kid in a ball pool. It was a great example to see how they brought tourism to nature without slaughtering the wildlife or cutting down the trees. There was camp areas and a few small facilities. On the way to Las Vegas we needed to buy gas to our car. The gas price was $5.20 (it was $3.90-4.10 normally) in the last gas station at the exit of the valley and GPS was showing that there was 3-4 more gas stations in the next 20-30 miles. So we didn’t buy that expensive one and continued to our journey. What we didn’t know was that the gas stations mentioned in the GPS were either closed or not existing. First, we were climbing up to 3.000 meters and our tank seemed to have %10-15. When we started to descend, the gas bar went to zero. We were really scared to end up out of gas in the middle of nowhere. We finally found a gas stations after driving more than 100 miles.

We reached to Las Vegas at around 4 am after the long trip from San Francisco and Yosemite Valley. We rested for a few hours and went exploring Las Vegas in our car. Parked in a few casinos and tried our chance for the last time. Before catching our flight at night, we had to return our GPS device to walmart and the car to rental office. First we went to walmart and returned the device. Then we tried to find the car rental office using our maps which we marked earlier. We were lost in Las Vegas without the GPS and lost about an hour trying to find the rental office. We had so limited time to catch our flight. After finding the office and returning the car, we went to airport only 15-20 minutes before our departure time. We were the last ones to get on the plane 🙂

I drove around 3.500 kms during our 8 day trip. Grand Canyon and San Francisco was kind of a disappointment for us because of the weather. If I can go back to USA to travel, I will definitely go and camp either in Yosemite Valley or Grand Canyon. Total cost of the travel was around $1.000 per person (Including food and others not listed below). It wasn’t really so cheap but we had so much fun and it was definitely worth it.

Prague city center without tourists on a Sunday. #

Waking up before the birds just to experience this

Let’s slow down the waves and jump into it #summ

Halloween & 🎃 carving at the office. #halloween

View from the top of Conrad #travel #istanbul #bog

Look how the trees turned all white in 20 minutes.